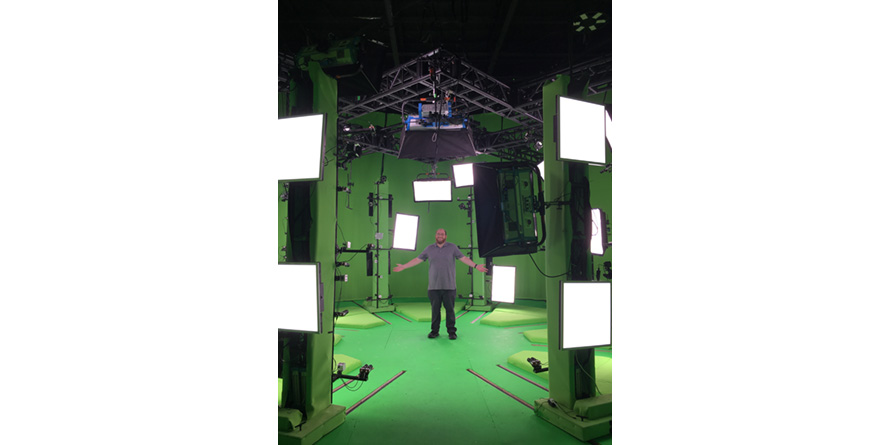 On a rainy evening in January, after working my day job providing video engineering support to two full stack web app development teams for The Walt Disney Studios, I drove up to an industrial warehouse complex in Sylmar. We had been invited to tour a sound stage that contains one of the world’s only volumetric video capture rigs, operated by Metastage. What I saw was a small but passionate team of people working on the bleeding edge of volumetric video capture technology and having a fun time doing it. Using an advanced software stack developed by Microsoft as its backend, Metastage has constructed an intimidating array of input devices consisting of fiber connected RGB & infrared cameras, infrared laser emitters, and shotgun microphones, all beautifully lit by a swirling vortex of Arri lights. I felt like I was walking inside a pantheon of bleeding edge technology with columns of cameras reaching high above me. This combination of advanced capture technology and sophisticated software to do the heavy lifting of stitching and compression allows them to provide high resolution visual and high fidelity polymesh scans encompassing all around, on top or bottom of any person, object or even animal to provide a truly immersive experience when viewing the final product while also keeping relatively low file sizes for the deliverables. In a recent Metastage production, an NFL team built a location based experience around their stadium where several players could be viewed as augmented reality giants, doing their signature call-outs, pump up chants, and war cries. They also filmed an AR music performance for an upcoming pop star and some adorable footage of adoptable dogs for an AR experience at an auto show where they partnered up with Volvo & the dog adoption site Petfinder to help place the pups in good homes. I was shocked and impressed by the seamless blend of the finished assets when composited into a live environment using their AR demo app.  The popstar looked like she was dancing right up next to the YEPs in the room.

You can get a look at this yourself by downloading their app ‘Metastage’ from either the Apple App Store or Google Play Store.