Award Winning Colorist Matt Watson On the Road to WandaVision

Migrating from sound to color and from the UK to the US, Watson has enjoyed the ride
By Chris Bunish 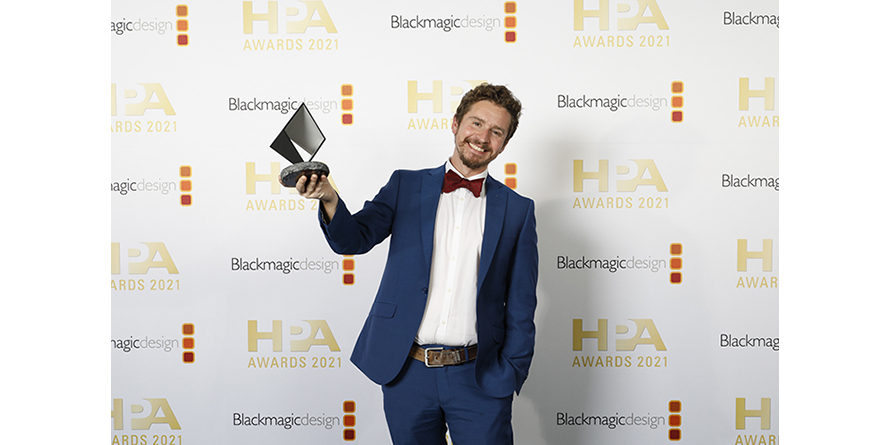 When finishing colorist Matt Watson started in the industry in 2005 in London he was initially interested in sound editing. But as he spent time shadowing sound editors he never met one who said he wanted to be a sound editor: they all recited versions of the proverbial “But what I really want to do is direct” speech.

“That made me think!” he declares. “Then someone offered me a job in a telecine house, and although I had no idea what telecine was I took a look and discovered it was like being in a darkroom. I had done photography in university, and it was great. So I decided to cast my fate to the wind and enjoy the ride!” A ride which has taken Watson to Marvel Studios Finishing in LA and the recent HPA Award for Outstanding Color Grading for the penultimate episode of Marvel’s limited series, WandaVision.

Watson was fortunate to launch his career in color at London’s Midnight Transfer, which did 35mm and 16mm dailies, scanning, DI and restoration. “It was a small enough place that I got to put my hands on everything and spend a lot of time with colorists learning the craft and developing a lot of skills and practices, especially film handling, which people don’t get to do anymore,” he says. “I had a genuine interest in photography and the world of images, color and visual effects, so I decided to see where life as a colorist would take me.”

Watson went on to work as a colorist at Deluxe Digital London, Technicolor Soho and Shed. He worked with Marvel on a number of their dailies setups. During his work on Guardians of the Galaxy 2, while working at Shed, he and his team had made a bespoke workflow to streamline the color pipeline and bridge a gap between camera, VFX, and finishing. He was in his second stint with Technicolor when the chance came to work for the same group (now Pictureshop) in the US and be loaned out to Marvel. It was March 2020 – another moment when fate intervened in his career.

“The pandemic was just starting and flights were shutting down and borders closing,” he notes. “I had been wanting to experience life in the US, and here was an opportunity to work at Marvel. Do I hop on a plane with my wife and daughter and go, or do I hope there will be other opportunities in the future?”

Watson and his family took the ‘go’ option, and Watson became a finishing colorist at the Marvel Studios in-house facility dedicated to its streaming shows.

Watson quickly discovered that “finishing shows is done in a slightly different way here. Instead of the traditional way of shooting, editing, doing the VFX and then the DI at the end, the colorist becomes attached to a show and deals with every step in the pipeline to see where we can help. I love that! We worked in a similar way on smaller jobs when I was at Shed; we were small and nimble so we could come up with cool pipelines and do bespoke work that big shops weren’t flexible enough to handle. Here, Marvel has stepped that up. We have the time, resources and freedom to figure out how to help the whole process and ultimately tell the story in the best possible way.”

WandaVision”finds Wanda Maximoff and Vision leading suburban lives in the alternate reality of Westview after Wanda suffered a mental breakdown and Vision died in the MCU. The limited series often integrates the looks of classic American TV shows – The Dick Van Dyke Show, Bewitched, The Brady Bunch – into scenarios, most of which Watson saw in reruns growing up in the UK.

“As a colorist, to be able to have one season where you come up with so many looks and options was so much fun,’ he says. “For the period pieces we could either take the approach of faithfully emulating a show or creating what we remember it looked like. Those are two different things. Because we’re dealing with Wanda’s memories of those shows, we had the creative freedom to use our memories of the shows. The Brady Bunch look in episode three is my favorite of the period looks – it’s so colorful but not in an overly saturated way. If you compare it to an actual episode of The Brady Bunch it doesn’t really look the same: It evokes your memories of the show instead of copying it.”

Watson worked closely with cinematographer Jess Hall, ASC, BSC, on the series as well as Marvel’s Creative Finishing Supervisor Evan Jacobs and VFX Supervisor Tara DeMarco. “The look development was so collaborative and flexible, which really helped the process develop in a nice organic way,” he says. “Jess had already done so much prep with the period lights and lenses. He and I then dialed in the tonality and color scheme of each period look in all the early camera tests so that the dailies and cutting copies were close to the final look. We treated the textural qualities and period degradation in finishing in conjunction with Evan and Tara.”

When COVID 19 made in-person screenings with Watson difficult for Hall and DeMarco, they participated remotely from home via Sohonet’s ClearView Pivot and Flex. “I missed the client interaction but Jess and Tara could dial into DI for five minutes so I could show them something or they could sit in on a full session,” Watson points out. “What initially seemed like a restriction pushed us to a more flexible way of working.”

Choosing an episode of WandaVision to submit to the HPA Awards was “a struggle,” Watson recalls. “The episodes had such a rich array of different looks, emotions and feels. A lot of the shows were styled to reference the period pieces. But episode eight, ‘Previously On,’ didn’t have much of that. Instead, it’s an episode where Wanda takes a journey through her life, in flashbacks, to see how she arrived at this point. It reveals to us her emotional state. Everything was so beautifully shot, so moving and the different notes of color so appropriate. There were no epic fights or magic scenes; it was just an intimately emotional piece.”

Watson’s favorite shot of the series happened to be in episode eight: Wanda shown in black and white smiling as Vision comes back to life. “I didn’t have to do a single thing to it,” he admits. “Jess shot it so beautifully.”

Watson is now actively supporting She-Hulk and Ms. Marvel, ” and “a tremendous amount of [streaming] shows are coming down the pipe,” he reveals. “The way we absorb content has drastically changed. And 16 or 17 years after I was doing film transfers, how we work and the speed at which we work has changed dramatically. It all makes for a super-exciting future!”