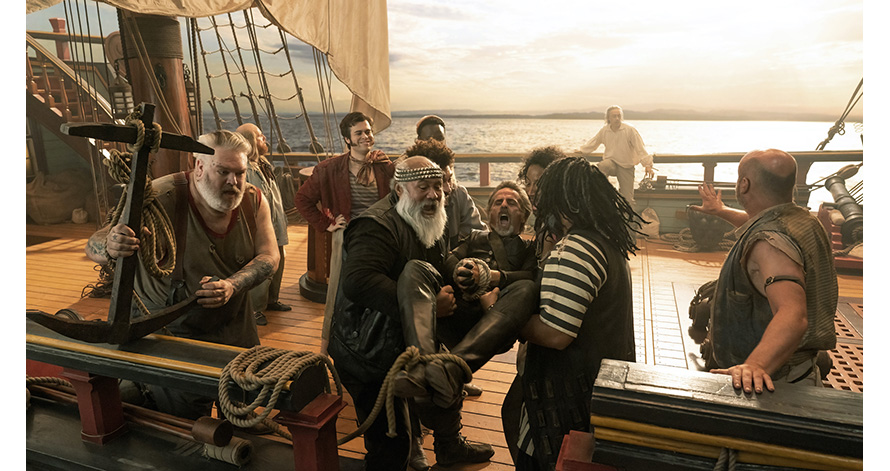 After trading in the seemingly charmed life of a gentleman for one of a swashbuckling buccaneer, Stede Bonnet, played by Rhys Darby, becomes captain of the pirate ship Revenge. Struggling to earn the respect of his potentially mutinous crew, Bonnet’s fortunes change after a fateful run in with the infamous Captain Blackbeard. Created by David Jenkins and starring Darby and Taika Waititi, “Our Flag Means Death” is executive produced by Waititi, who also directed the pilot, alongside Showrunner Jenkins, Producers Garrett Basch, and Dan Halsted.

One of the earliest challenges in creating the pirate adventure was visualizing the extensive storyline set on the high seas. Virtual Production Designer Sam Nicholson, ASC and his visual effects (VFX) team at Stargate Studios were tasked with using virtual production to make principal photography both manageable and cost effective. Nicholson’s solution was to capture ultra high resolution imagery of actual ocean footage, stitching together the multiple plates, then displaying them on a massive 30 foot by 160 foot LED wall that would surround the practical pirate ship built on set.

“We tend to take impossible tasks and make them possible,” said Nicholson. “How to shoot stable 48K 360 degree plates from a boat off of Puerto Rico is complex problem solving to the extreme.”

The task was challenging on several levels, including how to acquire the footage, manage the massive amounts of data, process it all seamlessly, and then deliver the imagery to set. Nicholson focused on a single pipeline solution using Blackmagic Design to create a streamlined approach. To start, he chose Blackmagic RAW for the most flexible camera format and planned to run it entirely through DaVinci Resolve Studio editing, grading, VFX and audio post production software for processing to maintain the most efficient pipeline possible.

The cameras were controlled using an ATEM Mini Extreme live production switcher, which was able to simultaneously trigger recording on all cameras, while also ensuring each camera had matching timecode.

Shooting in Blackmagic RAW, the team was able to view real time playback in DaVinci Resolve Studio at multiple resolutions. “Blackmagic RAW filled a critical niche in our high resolution imaging,” continued Nicholson. “With any imaging system it’s critical to pick the right workflow, the right gear and the right approach to data management. Recording in camera is easy. But then you have to offload it, transfer it, transcode it, distribute it, color time and process it to make it usable on set. Blackmagic RAW was very efficient in addition to looking great.”

In preparation for first unit photography, the Stargate Studios team processed the footage, stitching plates together in DaVinci Resolve Studio’s Fusion page, and then created a live feed from multiple DaVinci Resolve Studio seats through the ATEM Constellation 8K live production switcher. The final color timed composite was then fed into Epic’s Unreal Engine for camera tracking and off axis distribution to the 20K LED wall. While the live feed worked well, Nicholson found it valuable to record the final graded imagery to a disk based recorder for quicker access. The HyperDeck Extreme 8K HDR recorder played a critical role of recording the massive resolution images from DaVinci Resolve Studio and making them ready for instant playback.

While a pirate comedy like “Our Flag Means Death” seems like an unlikely a project to embrace virtual production, the key for Nicholson was telling a convincing story, whether the viewer was aware of the magic behind the scenes or not. “Virtual production comes in all sizes and shapes,” said Nicholson. “It can be one OLED monitor all the way up to an LED wall the size of a football field. And ultimately, if it feels real, it’s better for everybody, from the actors to the director and, of course the viewer. But at any level, if you look at it and say to yourself, ‘this looks real,’ then we’ve done our job.”