Inside the Projection Booth at the Hollywood Legion Theater 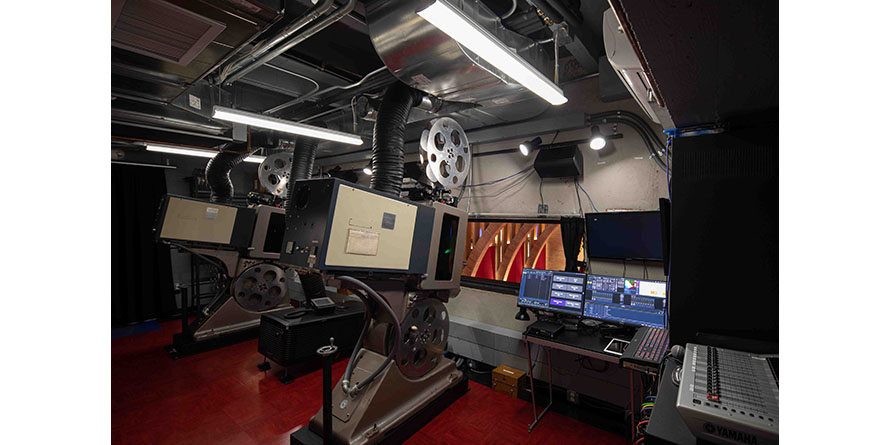 The Egyptian Revival style building on the west side of Highland has been a Hollywood landmark since it opened July 4, 1929, a fitting date for the building which was commissioned in 1919 by World War I veterans and has been home to the American Legion Post 43 since then. The site includes an art deco speakeasy once frequented by Charlton Heston, Humphrey Bogart, Clark Gable, Gene Autry, Ronald Reagan, Micky Rooney, Stan Lee and others, and a large meeting room that hosted dances and meetings.

Post 43 embarked on a $6 million makeover that resulted in the construction of a state-of-the-art 482-seat motion picture theater, the only Hollywood theatrical venue owned and operated by veterans. The American Legion is the nation’s largest wartime veterans’ association, and Post 43 is home to and provides services for 1,400 veterans, as well as services for youth and the community. Nothing in the group’s mission statement suggests that opening a movie theater would be a natural fit. But its heart-of-Hollywood location had always tied Post 43 to the film community, and its members decided to take the leap in creating the best motion picture theater possible to increase the strength of those ties. 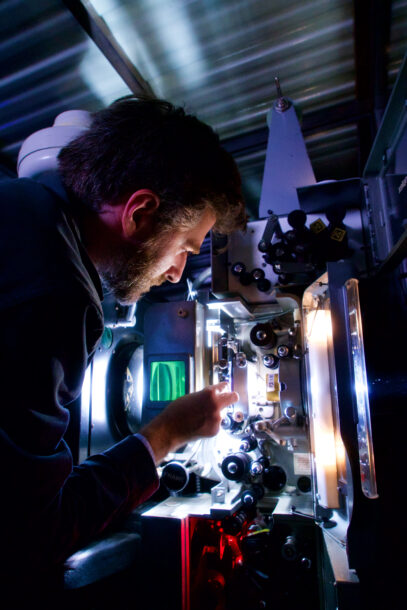 “I had never heard about a veteran’s group building a world-class 35mm/70mm and digital cinema inside an American Legion,” says the project’s creative director/chief projectionist Taylor Umphenour. “Those are two Venn diagrams I never thought would overlap. But the American Legion Post 43 stands at a unique crossroads of old and new Hollywood and the veteran community and I wanted to be involved.” Umphenour, who supervised finishing of the projection booth, started his career as an IMAX 15-70mm projectionist. “It’s a film format that is completely unforgiving,” he remarks. “It’s a very exacting environment and it’s where my habits were formed and where I came to understand the value of preparedness and attention to detail.” Later, he moved to an art-house movie theater where he operated 35mm carbon arc projectors. “I really benefitted from understanding both ends of the spectrum,” he said.

When Umphenour arrived at the Hollywood Legion, the makeover of the entire building had a deadline. “I came on in Fall 2018 and the Turner Classic Movies film festival was set to debut in Spring 2019,” he recounts. “The first thing that needed to be done was the film system, which had been purchased from Los Angeles Center Studios and needed to be completely overhauled and restored for 35mmm and 70mm in time for the film festival.” One challenge was finding parts but, says Umphenour, finding “support staff who know these projectors well enough to resurrect those machines” was an even tougher hurdle.

He gives a shout-out to the invaluable support from Bill Steele, the theater director, and Roger Addams, the Norelco AAII projector technician. “The three of us worked as partners in making sure the engineering on the film system would be complete by Spring 2019,” he says. “As a team, Bill and I set the standards for what we wanted to accomplish, and everybody rose to meet those standards.” Since the debut of the projection booth, Umphenour says, they have added the ability to run at variable speeds. “Now, when we project silent films, we are able to run them at the frame rate at which they were originally shown.” The booth also has a Christie 4K projector for digital projections.

Steele’s role was to oversee the remaking of the theater’s cavernous interior, a massive 6,500-square foot concrete space with 80,000 cu. ft. of air. The greatest challenge there was “taming the acoustics.” “We had to get the decay to a level that allowed cinema sound to really shine,” Umphenour says. British acoustics engineering firm Arup did an auralization, a technique for the reproduction and creation of sound that enabled Steele and architect Peter Gruneisen to hear the space before it was even built. Using auralization, Grueneisen, who has designed many of film composer Hans Zimmer’s recording studios, applied specific acoustic treatments that resulted in a dramatic improvement in the room’s audio. “It was night and day,” says Umphenour.

Since opening the Legion Theater in Spring 2019, it has hosted a robust film schedule until COVID-19 hit in March 2020. Steele and Umphenour approached the American Legion board with a proposal for converting the parking lot into an outdoor cinema, which was approved and opened in early October that same year. “We’re in the heart of Hollywood,” he says. “We needed to find a way for people to safely enjoy entertainment together.” The schedule can be found at www.hollywoodlegiontheater.com.

“The American Legion Post 43 is to be commended,” says Umphenour. “They took a big risk on doing something good for their community and the Hollywood community. It’s not a risk a lot of other organizations would have taken but, downstream, it created a beautiful world-class venue that is starting to pay off.”

The HPA Awards will take place at the American Legion Theater on November 18.